Neural Networks for a beginner (Part I: theory)

The idea of an “artificial neural network” — that is, a networked series of transformations taking inputs and outputting a prediction — traces back to at least the 1950s as a way to explicitly model the function of the brain with a mathematical model. Interest in NNs has recently increased, with large NNs (so-called “deep learning”) at the core of algorithms in breaking news articles like beating humans at Go and self-driving cars. Below is a video of a NN learning to play an Atari game.

NNs are now so ubiquitous that even that actress from Twilight has a paper using them (credit Andrew Beam’s great post for this find).

This post will attempt to demystify the inner workings of this trend in machine learning by giving a rudimentary theoretical background on how NNs work. My aim is to make the material accessible to an elective-level undergraduate audience focusing in applied mathematics or computer science. Most of the exposition is based heavily on that in MIT’s course 6.867.

A neural network (NN) consists of many small, simple computational units called neurons or nodes that perform simple tasks. Each neuron takes a scalar input, passes it through some transformation (like a sigmoid, or many others, which we will cover later), and spits out a scalar output. The NN is in this sense a “black box”: we feed an input, it returns an output.

Our data consists of a set of pairs where is the vector (ordered list) of scalar values for the -th entry, and is the corresponding target value. We typically consider , where is the dimension of the independent variable, and denote the -th feature of the -th data point as .

Our task is to develop a model such that given a previously unseen , we can accurately predict . We will assume we are given some block of data on which to train our model (the “training data”), and will be testing our model an unseen block of data (the “testing data”). And because this is a post about neural networks, we decide that the best model to use for this is … a neural network.

First we feed the input forward through the NN, doing all the transformations at each node in each layer, until we reach the final layer which gives us our output. Of course, each of those transformations requires parameters, which we can set more or less randomly the first time through (more on this later). We will briefly describe this intuitive “feed-forward” process, before discussing the less-intuitive process of measuring how wrong our output was and feeding the correction back through the network to improve our NN.

(In this post we will only consider input that is a vector. We can generalize our input to matrices (for example, an image as input) later.)

A neural network consists of:

Consider a NN which takes inputs with features, passes it through a single hidden layer of neurons, and outputs a scalar value. Each layer is fully connected to the next. 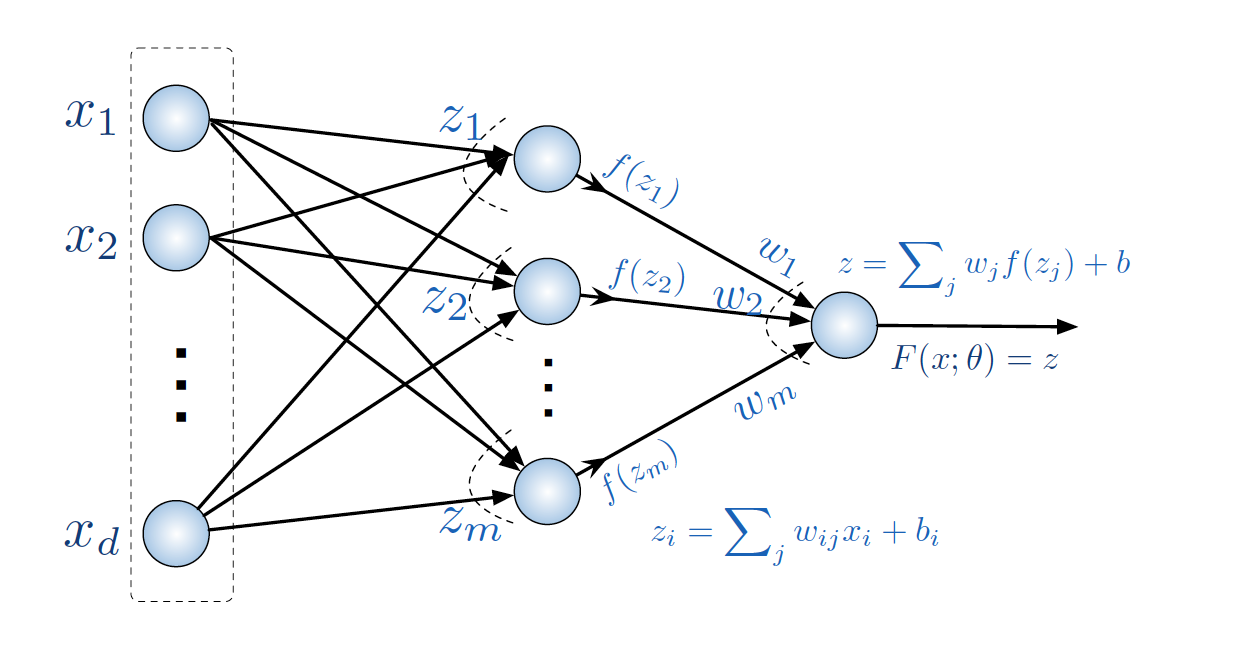 The input vector is . Then, each hidden layer neuron computes its output in two steps. First, each neuron does a linear transformation of the entire input layer, for example the -th neuron computes:

according to weights such that where is the size of the hidden layer, and . The is some intercept parameter (just like a linear regression). Then, the hidden layer neuron uses this scalar output to perform its activation step:

where is the activation function of the neuron. Now note that if we make , then each neuron is just a linear transformation of its inputs, and we’ll just get a giant linear regression! Instead, we typically use non-linear activation functions. Examples: the function is called the rectifier and we would call this neuron a rectified linear unit or ReLU. Another popular choice is the sigmoid function . Intuitively, the ReLU “zeros out” any negative input (and does nothing to positive input), while the sigmoid transforms any input to the range .

Finally, the single output neuron receives all these ’s and computes

or in other words, does another linear transformation of all the ReLU activations according to weights and intercept , then outputs this scalar value.

Now we have a black box built — how do we train it to give good outputs?

You are of course familiar with single variable linear regression, where we choose parameters for a line (slope and intercept) that minimize the sum of squared error between that line and the actual data.

We can take the same approach here. Let’s choose a loss function that computes the error between a target value and our predicted value (i.e. the output of the last layer). For example, we might pick (our familiar friend the squared error). Now, formally, we want to find a parameter estimate that minimizes the loss over all data,

where refers to all the parameters of our black box, which is alllll the weights and intercepts assigned to each neuron. That’s a ton of parameters. What’s worse, whereas with linear regression we could solve this optimization problem analytically, we know that term is hiding a recursive list of a bunch of hidden layer activation functions which we’re not so sure will give rise to a closed formula. Also, whereas least squares is a convex optimization problem (meaning there is only one minimum and it is the global minimum), our neural network is non-convex (meaning there might be a lots of local minima before we find the global minimum).

The first trick we can hurl at this problem is to minimize our total loss using a numerical optimization technique called stochastic gradient descent.

You are probably familiar with basic gradient descent. This is the idea that, given some function (where may be a vector), we can navigate to a minimum by pointing in the direction of steepest descent (i.e. the direction of the negative gradient), taking a carefully sized step, then repeating. Eventually we will reach a minimum, and if our function is convex, it will be the global minimum.

Stochastic gradient descent (SGD) is a version of this method that we can use when the function we are minimizing is actually a sum of functions. Like, for example, our sum of the loss function on each data point. In SGD, we just take a step in the direction of steepest descent at a particular data point. So each step is:

A cautionary note here: don’t forget that our domain is the parameter space, . We are used to seeing as the domain and as the range, but in this case (and as is typical in machine learning), the ’s and ’s are static datapoints, and it is the ’s that we are moving around in (the domain), measuring our progress in terms of (the range).

What is magical about SGD is that we can take a step like this at some random data point, update our parameter estimate , then pick any other random data point and do it again, iterating. And magically, we will eventually converge to a minimum. (Well, as long as some conditions are met such as tuning our learning rates correctly..)

Sidenote: There is growing evidence that one reason neural networks work so well, or more specifically, the reason they do not overfit despite their enormous number of parameters, is due to the tendency of SGD to find “flat” optimums, as opposed to “pointy” ones.

Let’s use our example from before and take a swag (Scientific Wild Ass Guess) at that gradient for some particular datapoint (note this is a single datapoint, just simplifying notation). We’ll look at just the partial derivative with respect to a single weight , which recall is the value of the -th element of the -th neuron’s linear transformation.

Let’s list the series of transformations/functions/activations from start to finish of our neural network:

So to take the partial derivative of w.r.t. some weight we can apply the chain rule and get:

Now this is encouraging. These are all very tractable partial derivatives: for example, the partial of w.r.t. is just . Depending on our choice of activation function or loss function we might have to resort to something called subgradients, but for now let’s assume we can write down all these partial derivatives and feel good about ourselves.

We still have a problem though. With potentially dozens of layers and hundreds/thousands of neurons, we have a combinatorial explosion of gradients to compute.

There is hope. The second trick, our finishing move, is to trade time for space (memory). If we can save in memory the inputs and activations at each step, then computing the gradient of the loss w.r.t. some parameter is a one-step, self-contained formula.

To make our derivation a little easier to follow we introduce some vector notation. First, denote the parameters for a particular hidden layer as the matrix . This is a natural choice: each neuron in a hidden layer corresponds to a column, and each element of the input vector corresponds to a row. Then also:

So we have collected all the weights of layer into a matrix such that the -th column are the weights for the -th neuron.

Now, we need to compute , i.e. the partial derivative with respect to each parameter of the model. Let’s consider just for some layer .

Here we just defined , the change in loss w.r.t. the layer . Note also that .

Now we sense we may be able to establish some recursion for . Let’s write

and since we know

we can differentiate w.r.t. and obtain

where is the diagonal matrix formed from the vector . Substituting this into what we had before, we write

and we have a recursion. So, from a layer , we could follow this all the way forward to the final layer as

and the last layer is .

Altogether, the procedure for training a NN is to

There are many other fine tutorials around the web for dipping one’s toe in the water of neural networks, most of them more detailed than the one presented here. My aim was not to be thorough, but friendly, and to cover all the relevant ideas in a short, digestible post. If you know of other good resources for my intended audience (undergraduates), I’d be happy to add them here, please contact me via email or Twitter. Thanks for reading!