Elo as a statistical learning model

Elo ratings are a ubiquitous system for ranking individuals/teams who compete in pairs. They began as a chess rating system, designed by Arpad Elo, but have since spread to sports and elsewhere (here’s an application in education). As a result, there is a lot of info out there on how to compute Elo ratings, presumably because they’re easy to understand and surprisingly good at forecasting. Heck, pretty much all of Nate Silver’s 538 sports coverage revolves around it. Here’s their forecast going into the last Superbowl … I guess they called it?

But there are very, very few resources on how the ratings work. I don’t mean what the formula is, I mean why the formula is what it is. What is the deeper statistical truth going on here?

I’m going to take a schwack at this. I’ll explore the Elo ratings as weights of a logistic regression found through stochastic gradient descent. A few other resources mention or hint at this interpretation, but their explanations feel cursory at best to me. (This also helps me connect Elo to its more typical framing as an AR(1) autoregressive process, where things like 538’s autocorrelation adjustment come in, since SGD is itself interpretable this way too.)

My hope is that placing Elo in a statistical learning framework will allow us to extend it, or improve it.

CAVEAT: An ulterior motive of this post is to lure the casual sports analytics enthusiast into a deeper understanding of stats, so if you have a PhD in statistics and a lot of this seems pedantic … my bad. (Also, if you find errors, let me know!)

For games with point spreads, we can also use Elo ratings to predict the spread: each game point corresponds to 25 Elo points (but why?).

First recall “odds” is defined as the probability of something happening divided by the probability it doesn’t (so 3:1 odds implies the thing has a 75% chance, since 0.75/0.25 = 3). Now define the “log-odds”

This is the workhorse “sigmoid” function, usually written \(\sigma(a)\).

(And doesn’t it remind you of the Elo rating probability??)

If we now assume the log-odds can be written as a linear combination of the inputs \(\mathbf{x}\) (or more probabilistically, if we assume the conditional densities are Gaussian with a shared covariance matrix and equally likely classes), then

for some “weight” vector \(\mathbf{w}\). Then the data likelihood can be written

which we’d like to maximize, or equivalently the negative log-likelihood

which you should verify on a piece of scrap paper sometime when you’re feeling frisky.

There isn’t a closed-form solution to Eq. \eqref{eq:entropy_grad} like there is for, say, linear regression, but we can readily apply a numerical technique like gradient descent. 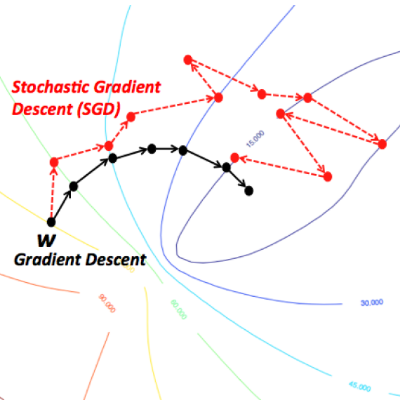 Gradient descent is the beautifully simple technique of looking for a minimum by taking small steps in the direction of the negative gradient, that is,

(Storytime: “first order” methods like gradient descent — so-called because they only use the first order derivatives, as opposed to second-order methods like Newton-Raphson — were once dismissed as too simplistic and slow, but found redemption in the age of big data (we need it to be simple!) and fast computers (not slow anymore!).)

Now notice, when the dataset is very large, the sum happening in \(\nabla E\) is very large, and so we are evaluating a very large function at every step of the algorithm.

It turns out, you can just evaluate the gradient at one of the terms in the sum, and move in that direction, and you will still provably reach a minimum, so long as you keep picking random terms and you do it enough times! This is absolutely magical to me.

This is called stochastic gradient descent, and so for logistic regression would look like

This is looking eerily familiar. We’re almost there.

or being a little more explicit,

Take a second and confirm: the only two lines where anything’s going on out of this update correspond to the two Elo update equations for a game up in Eq. \eqref{eq:elo}. Lots of signs flipping back and forth, and don’t forget \(\sigma(-a)=1-\sigma(a)\), but they’re the same!

This sparse input vector thing I haven’t seen elsewhere, and it does seem weird. It seems strange that you could encode the entire dataset with \(y_i=1\), and it seems strange that the effective space of the input data is strictly less than the original dimension.

Anyway, from a high level, Elo ratings are actually weights of a logistic regression to predict pairwise game outcomes, which we learn through SGD-like updates over streaming data.

This was a quick look at a statistical learning interpretation of the Elo rating system. Some other topics I’d like to explore:

Now, if we took a large “step” on our last update, we will take a large-ish step again, even if our gradient is small. This helps propel us through potentially long, flat portions of the error function surface. In the context of Elo ratings, this amounts to giving a team a little bump in ratings even if they had an unimpressive victory, so long as they had a blowout victory the week before.